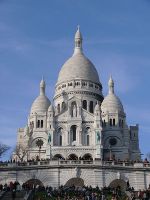 One of the main attractions in Paris is the famous Basilique du Sacré-Coeur (Basilisk of the Sacred Heart). A basilisk, as everyone knows from Harry Potter, is a mythological reptile that turns people to stone. I have never seen the one in Paris do this. In fact, it doesn’t look much like a reptile at all. However, it is common in nature for animals to disguise themselves to fit in with their surroundings, and Paris is chock full of large stone edifices. The basilisk has remained dormant so far, and many wonder when it will wake up and terrorize the Parisians and tourists. Others argue that it really is a large stone building, and is in fact named after the beast that turned it to stone in the first place, the original building having been made from wood or straw. Of course, there are always those skeptics that dig up contrived evidence (i.e., the dictionary) and say that the proper English translation is “basilica”, but that’s just nitpicking, since I am fairly certain that “basilica” is Spanish for “basilisk”. Is it building or beast? Perhaps this mystery will be forever lost in time.