I am very busy, but I have a lot of audiobook listening time. I have a long commute and I always listen to books while I exercise (even while swimming, thanks to my waterproof armband and headphones). So I figured I could get through a lot of books this year, and in Goodreads’s reading goal thingummy I chose 100 books. By the end of the year, I had read 128. I liked most of what I read. On a scale of 1-5 stars, I only gave one book a 2, and the rest were 3-5. A book I think is decent gets a 3, a book I really like gets a 4, and a book I try to make everyone I know read because it’s so awesome gets a 5. The average for the year was 3.96, with one 2, seventeen 3’s, ninety-six 4’s, and fourteen 5’s.

Anyway, since I read a ton of books, I thought I would make some recommendations from some of the books I gave fives to:

We Have Always Lived in the Castle by Shirley Jackson

I was browsing Audible for audiobooks and saw this book recommended to me. The cover looked creepy but it was the weird title that really got my attention. The reviews were very positive, so I downloaded it and listened to it on part of my drive to Seattle last June. It was much better than I could have hoped. It turns out that Shirley Jackson is a classic author who gets read in schools (except my school dropped the ball and we never read her short story The Lottery). There is even an award named after her, and several of her books are published as Penguin Classics. This books really is a classic. It is told in the first person by an unreliable narrator who is an unsettling yet very likeable character. She is one of my favorite characters in any book, and it’s the way she sees the world that make the book so unique. She is hard to describe, so I’ll just give you a sample. The book begins with this paragraph:

“My name is Mary Katherine Blackwood. I am eighteen years old, and I live with my sister Constance. I have often thought that with any luck at all, I could have been born a werewolf, because the two middle fingers on both my hands are the same length, but I have had to be content with what I had. I dislike washing myself, and dogs, and noise. I like my sister Constance, and Richard Plantagenet, and Amanita phalloides, the death-cup mushroom. Everyone else in our family is dead.”

The Haunting of Hill House by Shirley Jackson 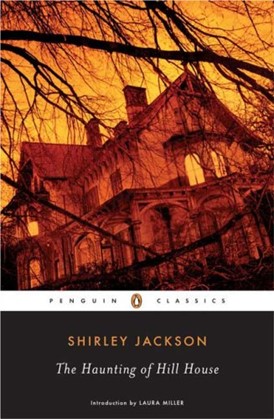 After reading We Have Always Lived in the Castle, I had to read the other book Audible had by Shirley Jackson. The Haunting of Hill House was also narrated by Bernadette Dunne, who is brilliant with both books. I recommend both audiobooks, but this one should especially be listened to so that you can read it with all the lights off. It is a very scary haunted house story. Like the other book, it has a great unreliable narrator. It’s not a gorefest like modern horror movies; the horror is more psychological in nature, creating a sense of mounting dread in parts and just creepy weirdness in others, with some moments where you and the character come to a sudden horrible realization. It’s great. The Wall Street Journal said it was “now widely regarded as the greatest haunted-house story ever written.” Read it in the dark.

This book is strange and awesome. It feels like an old literature kind of book, but takes place in a science fiction world where people live on mountains amid huge expanses of train tracks. The tracks are so thick that trains can go anywhere just by remotely controlling switches ahead of the train. Thus, this is a sea adventure, only with trains and no water. And instead of fish and whales, there are dangerous and huge creatures that burrow underground, so falling overboard is at least as dangerous as falling into the ocean would be. The book is inspired by Moby Dick, but different (it’s not the story of Moby Dick in another setting). While Captain Ahab was notable for his obsession with the white whale, in this strange world it is typical for captains to have an animal they chase obsessively. The story begins with a boy who works on a train with people who hunt for giant moles with harpoons. The story is good, but it’s the imaginativeness of everything, the brilliant writing, and fascinating world and characters that made this book stand out for me.

The Soul Mirror by Carol Berg

The Soul Mirror is actually the second book of the Collegia Magica, a fantasy trilogy. They are about magic users in the upper levels of the society, with the royal magician and family and friends of the king. I gave books 1 and 3 each four stars, but the second one had a particularly great story arc, so it made this list. The main strength of the trilogy is the characters. They are so believable and interesting. They have hidden depths that feel genuine as you discover them, so as you get to know them better they feel increasingly real. You learn where you had wrongly pigeonholed them as additional layers of their character are revealed, just as with real people. There is a mystery at the heart of the story, but it’s much more than just a mystery story. Read The Spirit Lens first. You must not read these out of order!

This is the first of a series of American steampunk books called The Clockwork Century. If you like steampunk, then you’ve probably already read them. If you think brass goggles and all the steampunk aesthetic are stupid, give this a try anyway. It’s really just a historical fiction novel with airships (whose existence is justified) about an alternate history of the later 1800’s. In this version of America, the civil war has gone on for a long time, so it makes sense for technology to have kept going (hence airships and other steampunkish machines). Some of the devices in the books are actually based on real historical attempts at making new machines. I picked up Boneshaker for two reasons: I liked the audiobook narrator, Kate Reading, and the book takes place in Seattle, my favorite city outside of Europe. The book was much better than I’d hoped. As the introduction explains, in this alternate frontier Seattle, a drill unearthed a poison gas that made the city uninhabitable, and turned the people who didn’t get out in time to “rotters” (i.e., zombies). The survivors built a wall around the city to keep the gas and rotters inside and live on the outskirts. Boneshaker takes place mostly inside Seattle, and has great characters and some awesome scary moments. Cherie Priest is brilliant at scary and suspenseful scenes, and she creates a wonderfully creepy sense of atmosphere. I like all of her books that I’ve read, but for now I’ll recommend this one and its sequels, which take place all around the country (or countries, since the confederacy and Texas are separate).